28 reviews
$5 - $12
Keep your character sheets pristine by using these dry/wet erase cards to track ever changing stats. Works with either dry or wet erase markers. Comes with one session card and one spell slot card. Card dimensions are 3.375″ x 2.125'.

A
Austin
What I've been looking for

Simple, easy, and it solves the biggest problem with physical character sheets.

I grabbed a set of these, thought I ordered the 4 pack. D'oh! They decently look cooler in person! In my opinion they could stand to be made just slightly larger than the current size around index or playing card sized. For both ease of reading and writing. Other than that I still think they deserve the 5 stars! 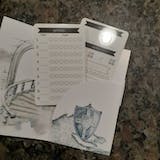 Great reusable utility cards that my players love for tracking without needing scraps of paper or messing up their paper character sheets. Great for the DM as well when NPCs get involved. Excellent and easily recommended product!

T
The Techno God
Easy Tool to Gift or Offer as a DM to players as alternative to paper.

I am a DM more often than not (haven't been a player in almost 2 years) and bought these for my physical players while we play DnD on Twitch. The cards aren't AS favorable for non-spellcasters but having the space for the HP alone makes it worthwhile in my honest opinion.

It's the most commonly marked area and ends up being the reason why I head to the printer to make a new sheet with the same stats just to have that clean canvas again and I know I'm not the only one who feels that way.

Besides, a 4 pack of Ultra Fine Expo Pens costs, like what, 5 bucks? For less than 20 you can have a completely paperless game for your players, though I always like to have a notebook personally as a player, which serves nicely along the backside of either of the cards for some temporary session notes before transcribing them over to your Wizards notebook.

All in all, I am very pleased with this purchase and had bought the Potion Bottles some time ago (forgetting I had got them here because it was a Facebook ad way back when), but my players love not having to hunt for dice and it's so stylistic... anyways. I digress.

Next up, Initiative Tracker Cards to make my weakness, combat, go along smoothly. I do think it would be cool to have two styles though, one for mobs and one for players. Think about it. All in all, gold stars all around.

I had to modify these ever so slightly for 3.5e spell slots (since level 0 spells work slightly different between the editions), but these are still really useful and nice to have! I also keep my gold on the back since there's a space for "notes" and that keeps my character sheet nicer for much longer. They're small enough to fit in the back of my of my pocket-sized notebook too. I love them.

M
Mattie C
These are great! Quite like them

Very handy in our campaign for tracking things. Kind of wish they had one that includes more wondrous item or daily uses, but you can use a spell level for those if needed, really.

These are a great tool to help prevent marring your character sheet with erasing so much.